It is morning in the open sky. We’re north of Idaho Falls driving quickly through wide volcanic ﬂood plains. The rock spreads as far as the eye can see, bumpy black sheets edged with basalt boulders. In washes and between the bumps and boulders sagebrush and grass have found enough soil to colonize. There are few wild trees and no evidence of perennial water. Farms, ranches and small towns are visible, clinging to breaks in the plains and reaching down for water. The land is open yet occupied.

I was raised traveling in the open spaces of the west. My father taught me that it was my birthright to see and my responsibility to treasure open lands, especially the public ones. And my drive keeps his teaching alive. I’m on the road again, immersed in the open.

We’re going to see family. For us this is a well-known path. Books, maps, road signs, memories, and family history guide us. We have a target, both in space and in time. A meal is awaiting us. We travel at highway speeds, seeing the land around us from the bubble of our vehicle, delaying the smell, the touch and the sound, but enjoying the view.

Then the volcanic plains are behind us. We’re now climbing to a low divide in a narrowing
valley. Tree-covered mountains on either side send us their water in a creek, Birch, that ﬂows back toward the plains. 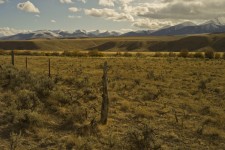 In The Valley of Birch 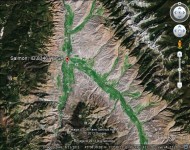 Over the Divide, Into The Valley of the Lemhi

We cross Gilmore divide. The mountains rise higher. The valley remains, but green fields start to appear, fed by irrigation from streams.  One stream now ﬂows with us, getting bigger on its way to becoming a river, the Lemhi. It carries with it a connection to history. 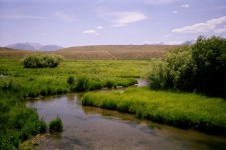 We are crossing the path followed by the Lewis and Clark Corps of Discovery in 1805. 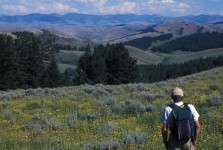 Through Lemhi Pass Toward The River

These intrepid folks  had started in St. Louis in 1804, looking for a river path through the newly-acquired Louisiana Purchase and surveying for resources. As they approached the top end of the Missouri River, they were looking for the Columbia River. They thought that a route south, over the mountains, would have to be found and that would require horses, hopefully from the Shoshone people who were thought to live in the area. So Lewis and a few others went ahead of the rest of the party. Fortunately, they stumbled upon two startled ladies who led them over the Continental Divide at what is now Lemhi Pass, to their Shoshone band. The band was led by Cameahwait, the brother, as luck would have it, of Sacajawea, who had been kidnapped from them some years before.

Over the next few days Lewis asked Cameahwait about the course of the Lemhi River before them. The chief told them it ﬂowed into a larger westerly river but said that passage along the latter was impossible due to high cliffs. 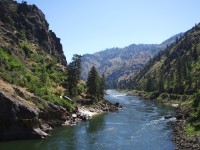 Then he pushed piles of sand next to the line and said that they represented mountains that had to be crossed to get west. The line was the Salmon River and the piles were the Bitterroot Mountains. Montaña was being named.

“but added that the road was a very bad one as he had been informed by them and that they had suffered excessively with hunger on the rout being obliged to subsist for many days on berries alone as there was no game in that part of the mountains which were broken rockey and so thickly covered with timber that they could scarcely pass.”

They would be on their own. He did give them the services of an older, nearly blind Shoshone, Old Toby, who might help them with translation once they had completed the passage.

In order to get the cooperation of the Shoshone, who were eager to get back over Lemhi Pass to begin their buffalo hunt, Lewis then made a promise. The enemies of the Shoshone, especially the Blackfeet, had been given guns and horses by the British in return for help in trapping. This put the Shoshone at a disadvantage. So Lewis promised them that, upon the completion of his trip, he would get them both horses and guns. Lewis was never to fulﬁll his promise. Broken promises were to become a hallmark of the American conquerors.

Our next stop is in Salmon for a brief break at a commercial establishment, getting coffee and stretching cramped legs before beginning our ascent up the sand piles. We head north, along the valley of the Salmon until it ends and the river turns west. In front of us we see the rise of the Bitterroots, a granite pluton uncovered and bobbed up when the earth’s movement pushed it’s crust east, also elevating the modern Rockies. Our path rises, following twists and turns taken at highway speeds, until we reach the top. On the side we see dense forest, much denser than in our Southwest. There are no precipitous exposures. It may be cold outside, but we are kept warm in our bubble. Our passage requires maybe 30 minutes to get to Lost Trail Pass, where we ﬁnd a rest stop and a view the beginnings down the Bitterroot Valley.

The Corps, on the other hand, found that Cameahwait had been right. The
passage was to become what one expert has called “the single most obscure and enigmatic of the entire Lewis and Clark expedition”. Clark tells us that the route was:

“thro’ thickets in which we were obliged to Cut a road, over rockey hill Sides where our horses were in [perpetual] danger of Slipping to Ther certain distruction & up & Down Steep hills…with the greatest diﬁcuelty risque &c. we made 7.5 miles” and added “we passed over emence hils and Some of the worst roads that ever horses passed our horses frequently fell.” 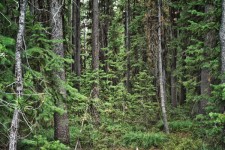 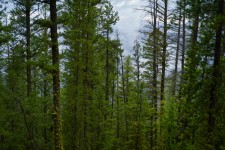 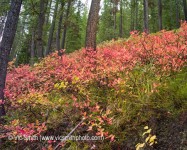 Lewis and Clark then led their band down from the pass. At the bottom, Big Clear Area(Ross Hole), the southern end of the Bitterroot Valley, they came upon a band of Salish people preparing to cross the mountains to the east and join Shoshone and Nez Perce allies in the Buffalo hunt.

The traditional story is that the Corps was cold and hungry and the Salish people gave them clothing and food. That is true. But the encounter was really much more complex than that. The Salish were not at all sure about the intent of the Corps. And the Corps wasn’t at all forthcoming about their intent. A Salish story says that the unlikely presence of a black man, York, and an association of his skin color with one of their religious ceremonies, probably saved the Corps from destruction. The people were gracious but wary of the new band.

Communication between the two parties was complex and prone to misunderstanding. The words said would have had to go through a two-way chain: english/french/hidatsa/shoshone/salish & probably some sign language thrown in near the end. In the end, however, Lewis did manage to get enough supplies and guidance to head down the
Bitterroot River, on the way to another mountain crossing at Lolo and a still-unknown future. Their accomplishments were amazing, yet their story would not receive its proper appreciation for decades after the completion of their mission. 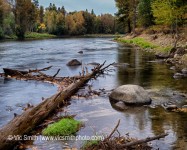 We continue down the valley past fences, through trees and brush amidst modern prosperity to a family, a warm welcome and a meal. While there we can put on our hiking attire and equipment and traverse the challenging places with relative ease. 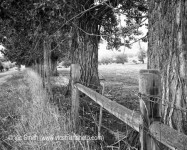 I’ve crossed places like this many times, Lost Trail Pass, Death Valley in CA, the Carson Desert in NV and the Great Salt Desert in UT. These places are striking because of the tales of suffering that have emerged. People bogged down, lost their possessions and suffered greatly. While wagon tracks may still be visible, my trips through them, 150 years later, have involved none of that. Perhaps a vicarious sense of danger makes us appreciate our lives. It certainly should help us maintain a respect for the struggles of those that endured them.

The Bitterroot Valley that the Corps entered was not “virgin” country or even a “wilderness” and it certainly didn’t need “manifest destiny” to improve it. It was a land that had been occupied for a thousand years by a people who were prosperous in their own way through the bounty of the land and by trade with other peoples. They treasured their land and knew that their future lay not in domination of the land but in participation
in it. The Puebloan people call themselves “people of the clay”. Like them, the Salish knew that they weren’t separate from the land or from the natural order around them. Life was a web and they were but a part of it. The land needed all of its creatures, big and small, including predators.

It was open communally held land, public land, without barriers, that had been effectively managed. The Salish name for Hamilton, my wife’s family’s home, still is “Scattered Trees Growing on Open Ground.” There were just a few trees separated by grasslands. They lived near forest that burned regularly, mostly due to lightening and climate cycles. And from this they learned what native peoples around the world had known for a long time, that regular
burnings controlled the trees and brush and enhanced the grasses, thus maintaining the bounty of the land.

The American move west was “a story of spirit and of opportunity”(Terry Tempest Williams), American opportunity. The people tried to share the bountiful valley with the Corps and those who followed the Corps. Unfortunately, like most of Europe’s march across the Americas, the American march became a conquest, more interested in vanquishing native peoples, whom they often dismissed as “savages”, than in cooperation and learning. When native peoples fought back many came to agree with Gen. Sherman, that all Indians not on reservations “are hostile and will remain so until killed off.” Over time the native land was taken and the people expelled to other lands that were, in turn, also taken from them. Land was fenced and access to ancestral places was denied. 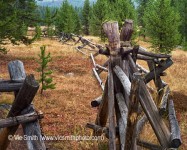 History is always written by the victorious. Thankfully, native peoples have survived and are letting us hear their histories as well. Despite the injustices, good people have come to the Bitterroot Valley with their own histories and their own vision of prosperity. The Bitterroot’s beauty and its bounty remain. An important part of that bounty are the histories brought forth by the peoples of the valley. 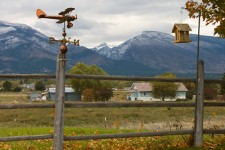 Welcome To The Collection

This entry was posted in Images, Places, Words and tagged Bitterroot, Idaho, Montana. Bookmark the permalink.