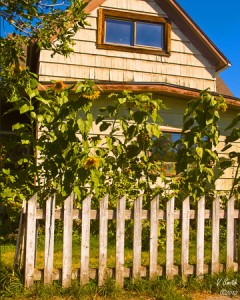 This post and its collection started forming
some years ago. On our way to Montana one
summer we took a detour through
Yellowstone and then on to Bozeman.
It looked like an intriguing village,
so we dropped in and got coffee. Being me,
I quickly spotted a little grain tower and angled over to capture it in an image. After doing so,
I turned around and smack across the street was a cute old house, its porch lined with sunﬂowers
and it’s sidewalk lined with an old white picket fence. It was a treasured home with classic
boundary fences.

The image was shared at the time, but solely as a record of the trip. My work had been focused on ﬁnding displays of the earth’s vitality and majesty and capturing them for others to see. For the most part, humans and their artifacts had been unwelcome in my galleries. I was a landscaper photographer and human artifacts were at least a
distraction. 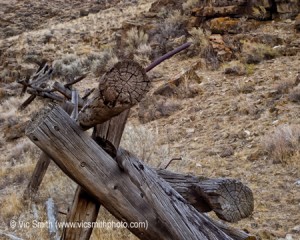 The next year we again headed north but drove through Idaho and the scenic Salmon River Canyon. It was a stormy day and just before we entered a slit in the dark magma, I glanced to the side and spotted an old abandoned jackleg fence, thrusting its nails to the sky in defiance of time and gravity. Perhaps I saw visions of a heroic past and perhaps simply saw the shape of the defiant log. I had a second image and the start of a collection.

As time has gone on, I’ve come to see that being in the wild is vital but not sufficient.
Lush valleys, mysterious canyons, rugged peaks and ﬂowing water will always be
the most magical. But humans are a species among others and seeing the impact of
human dominance on our fragile world is also crucial, especially in an age where so many
are estranged from their earth. I’ve heard, “if you aren’t on the edge, then you are
in the way”. This post, and the images that support it, is me moving, baby steps,
toward an edge, the edge of seeing the game trails of humans. Some of this movement
is easy and some of it brings controversy. But photography has often inspired
challenges to what is commonly accepted.

Fences, barriers, walls are ancient human artifacts creatively used to establish
boundaries. They seem to be a basic human response to the control of space. From time
immemorial, settlements worldwide have had walls both thick and thin and enclosures
of various kinds. The Romans ﬁlled England with field boundaries made from hedge rows,
in the south, or from stones, in the north and built Hadrian’s Wall near
the Scottish border in the second century.

Sometimes fences are accepted and other times they are questioned. Robert Frost wrote
about a wall in his poem Mending Wall. Every spring his stone wall needed repairs. He talked it over with his neighbor, with whom he shared the wall, asking him why a wall was required. There weren’t any animal combatants. His neighbor had pine trees while Frost
had apple trees. Neither was going to attack the other. But the neighbor would not go
behind his father’s saying: “Good fences make good neighbors”. Frost walked away,
thinking “something there is that doesn’t love a wall” and leaving the neighbor
to his mission.

I’ve noticed lots of fences along the way. Not all fences have been built alike.
They’ve been small, medium, and large. They’ve been rough and smooth and prickly. I
could sit on some. Some have still been vertical and others leaned. Some fences
have gone on forever without a break. Some have crossed impossible terrains.

Some fences are larger in scope but seem to fit into their space and others are
controversial, depending on your perspective. Consider the US/Mexico border fence, Great Wall of the Southwest. This metallic wall would plow through 2,000 miles of deserts as if they were soft putty completed. Along the way it will interrupt communities at all levels of existence. “Great Walls” have always required significant expenditure and seldom stood the test of time, especially in times of rapid change.

For those who may seek security in isolation, this structure provides comfort. For those
who may seek justice, it is an avoidance of the real issues and a dangerous waste of scarce resources.
The choice is ours to make. 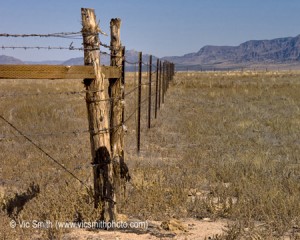 And consider our big west, the land of big skies and open space. Vistas most often seem alive with textures and colors, “geographies of motion”(Ivan Doig). For those who came, and are still coming to America, open land was the symbol of freedom and opportunity, providing “elbow room for the spirit”(Ivan Doig). But today these vistas are often broken by lines of fence stretching to the horizon. Much of this land, 300 million acres (the size of three Californias), is public, managed by the Bureau of Land Management and the National Forest Service using grazing permits. Why are there so many fences there, where the deer and the antelope should be playing?

Over the last century one million miles of fence has been put in place on public land
to support livestock ranches, those rugged places of mythic proportions. Many folks
have deep family attachments to this lifestyle. Yet it is land
“beyond the hundredth meridian” (Wallace Stegner), with only sufficient precipitation
to support sparse groups of native animals and plants. Public land grazing in these areas
is a mismatch to it’s aridity, requiring strenuous effort to take over the native
resources and fight back the limitations and challenges imposed by the land. These
practices have often resulted in habitat degradation and isolation for the native life,
animals, plants, and water. According to the National Resources Conservation Service,
at least 50 percent of the desirable plant species have been eliminated on grazing
allotments, there is high erosion and weed invasion and riparian areas are damaged. Of
course, 300 million acres is a lot of country to cover in statements. There are bound to
be exceptions. But the most common situation is as described above.

Because of these challenges, nearly 90% of our beef now comes from east of the
hundredth meridian, not west of it. The state with the most cattle is Louisiana. Over half
of the permits to use public land are owned by wealthy absentee owners who produce few
cattle, using the land for aesthetic or tax reduction purposes. Far less than one percent
of the US population ranch on these public lands and over half of ranchers using public
land permits must rely on outside jobs to provide their living.

For those who prize historic ranching, these fences either don’t cause degradation or
the effects are acceptable. To them the fences bring order and a sense of continuity and
support an important lifestyle. For those who believe that the earth and its creatures
must be protected, the scope of fencing questionable, a threat to life and a subsidy
that we can’t afford anymore. And there are shades of gray in between the extremes.
Again, the choice is ours to make.

Fences bring order but they can also introduce complexity that changes over time. This
brings controversy that communities must resolve. It is hard work to achieve these
resolutions. But seeking consensus is the real key to lasting success in a complex world.

You’ll see a variety of fences and their contexts in this collection, gathered over several
years using multiple cameras. It is but a small sample of what I’ve seen
(there are plenty left for you). Keep your eyes open to watch for them.
(Thanks to Rob McKay Photography for the watcher)

Welcome To The Collection

This entry was posted in Images, Words and tagged Boundaries. Bookmark the permalink.