The cold moist air comes from the north, gathering its heft in the Gulf of Alaska. As it
heads south, it runs into range after range and as it rises to pass over them, it condenses and drops it’s moisture onto the earth in the form of ice or snow. The residue stays there up high in the cold, comfortably perched and ready for action once it is released.

Spring brings warming, releasing the moisture and sending it on its way, toward the waiting valleys. Water joins with water in many courses, large and small, and starts to roar as it is commanded by gravity to go down. Along the way it moves rocks, trees and stumps and closes the roads carefully laid to give access to it.

And then the roar subsides and calmness returns. The big green trees are fed, waders venture in, beaches are played upon and ﬁshing resumes. The rest of the year begins. The big water has come and gone, for another year.

I experienced some of the roar this year in the Bitterroot Valley of Montana, on Lost Horse Creek. I found a rock conﬁdently protruding into the ﬂow and proceeded to use it to absorb the effects of the torrent. It grabbed all of my senses. My ears were ﬁlled with the sound of the water rushing past and around obstructions. My skin felt the moisture released by the turbulence. My eyes saw the length and breadth of the charging ﬂow, tumbling over and into rocks and sending sprays up in the air. Through the water I could see the creek bed, rocks hunkered down letting the roar pass over them. The thrill and challenge of this time ﬁlled me.

Standing next to the roar the scene up creek and downcreek was different. Upcreek I saw the water coming at me, relentlessly. The path was clear. The water turned a bend and rushed down, passing over rocks and toward me. It churned and bubbled and then went on its way. 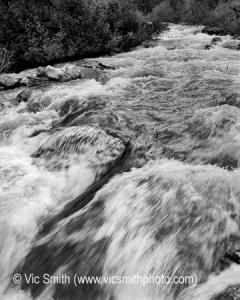 Looking downcreek I saw the leftovers from the roar. That which was large and gangly was getting jammed against other misﬁts and then caught against immobile objects, like rocks and shores. The roar had collected them all into piles and added ever smaller left overs as well. What the torrent missed in texture, the piles provided. The water hitting the rocks sent up sprays, hanging for a moment and then dissipating and being replaced by another spray from a neighboring location. None of the hangers or the rocks were moving, just the ever rushing, spitting and roaring water. 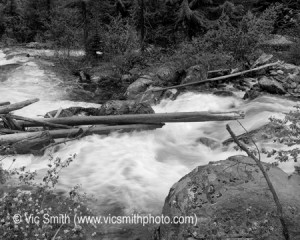 My time next to the creek reminded me of another body of water, the Canyon of Lodore, described by John Wesley Powell. A poem inspired his naming of that section of the Green River and adds a bit of playfulness to my memory of the roar as well.

The more I watch the operation of our world, the more I am awed by its power. As reminders we need look no further than the modern record of earthquakes, ﬂoods, eruptions, hurricanes and tornados. Like the creek roar, these are the noisy events. But there are also slow, quiet events, e.g. the tipping of the giant Sierra Nevada range as the earth stretched, the rise of the Colorado Plateau over 4,000 ft as plates collided, the carving of the Grand Canyon by the Colorado River and the relentless rate of species extinction underway now . Humans may change the course of life on earth, but the unrelenting power of the earth will always have its way. Life has come and gone and come again. The roar of the creek reminds me that the earth’s power to move mountains on its own time scale and foster life remains supreme.

This entry was posted in Images, Places, Words and tagged Bitterroot, Water. Bookmark the permalink.

1 Response to The Roar