Water From The Plateau

Water is a miracle. It appeared on earth not very long after earth coalesced solar dust
and gas to form its core. From this water, life quickly appeared. This linkage, life and
water, is still crucial to our existence and to our sense of well-being. Humans are 60%
water. We can live for a few weeks without food but only a few days without water. And
for the most part we find the sights and sounds of water to be a mysterious, soothing
and grounding experience.

I, however, live in the land of Sinagua, a Plateau without water. It is a name given by the earliest Spanish explorers seeking their golden cities but finding a land whose cinder cones, red rocky outcrops and treeless flats were the embodiment of aridity. Earlier inhabitants, the Ancestral Puebloans, knew how to prosper in this aridity. They know where to find the water that their life ways required. Their heirs maintain that knowledge, seeing water as part of a life-giving cycle in which it is treasured, protected and conserved.

Many who live here come from more watered areas and all too often expectations and policy have been driven by the misconception that life west of the 100th meridian should be the same as that east of the division. The history of water in the west has often been problematic because of the expectations and the boosterism of those promoting the region for their own gain.

Living on my piece of Sinagua land is especially challenging because we receive nearly 100 inches of snow each year. So as I’m shoveling, I already know that the water won’t stick around. 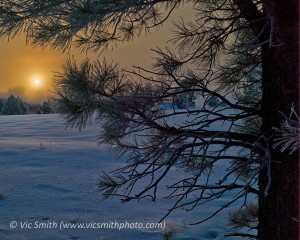 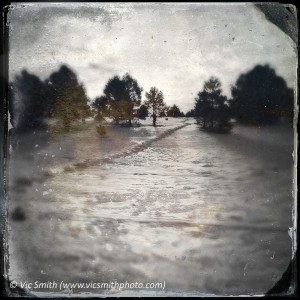 A Cold Morning on the Snowshoes

Yet there is little evidence of moisture other than snow, no natural perennial creeks or rivers and only one lake. 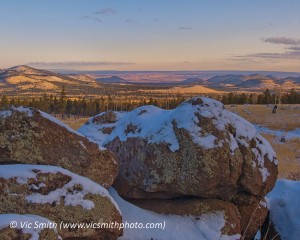 For a brief period in the spring, there are places of water. 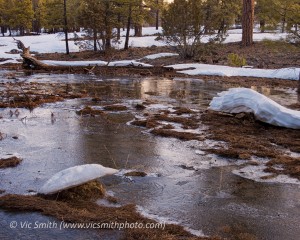 But then it is gone and the only evidence is in the pine trees and grasses. Where does it go?

Like water everywhere, it goes down. It waters the pine trees at the surface and then
down into the limestone that forms the caprock on which I reside. It flows along surface
washes and then through cracks as it sinks deep, forming underground water courses 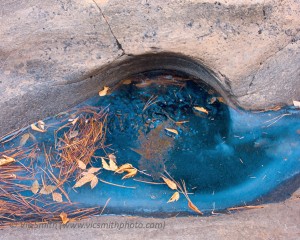 Water In the Rock

that can link together to form pools, can form rivers that seasonally burst out at
opportune locations or can trickle down and seep out in a steadier fashion.

I see all these scenarios around me. When snow is plentiful, my trees retain deep green
needles through the summer. The water that flows from my faucet comes from a pool
2000 feet underground, formed by the same fault that has created the modern Oak
Creek Canyon. 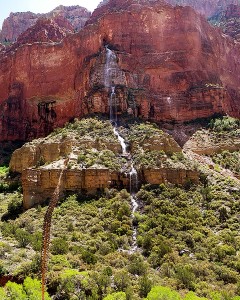 If I go to the Grand Canyon, in a good year
I can see the outburst of Cheyava Falls in
the Clear Creek area, a place that
the legendary Kolb brothers
investigated by climbing
into its underground course.

Or I can see the magic of Vasey’s Paradise, the brief but
powerful course of Thunder River
or the sound of Roaring Springs. All of these outflows
sink until they hit a harder layer and
then flow toward their exits. 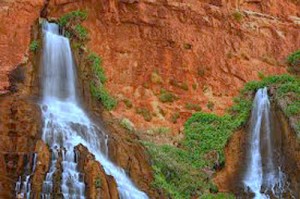 Vasey’s Paradise: A Cool Stop on the River

If I go south or to the Little Colorado River, I can see the surface flows engorging washes, creeks and rivers. They join together in narrow canyons and then emerge to fill downstream beds well above normal levels. 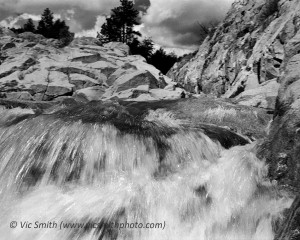 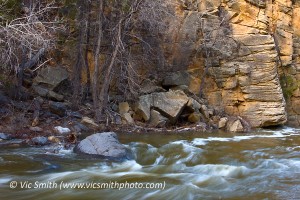 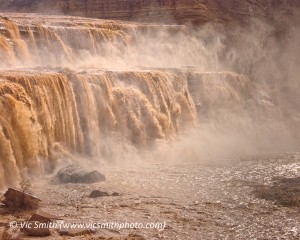 And then the washes return to their normal dry state and the water that
emerges as small springs and seeps can be seen, filling the creeks with their normal
flows. 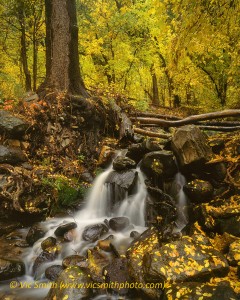 In short, the water goes many places and provides many magical moments. The water rises, falls and then the snow comes again and the magic is renewed and the cycle starts again.

This entry was posted in Images, Places, Words and tagged ColoradoPlateau, Water. Bookmark the permalink.